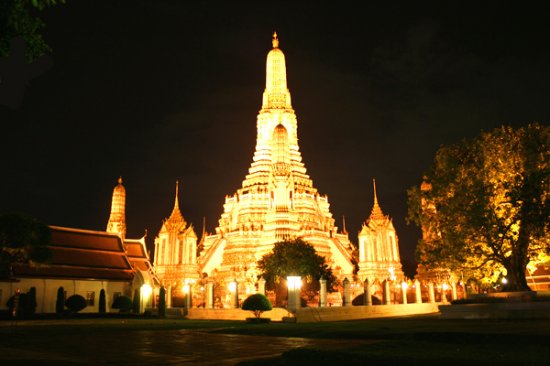 Named after the Indian God of Dawn-Aruna, Wat Arun is a temple of Dawn. This temple is one among the 31200 Buddhist temples spread around Thailand. Wat Arun is situated majestically on the side of Chao Phraya River, and is among the most extravagant landmarks of the Thailand. The view of the temple is incredible from the river side, especially at sunset where the monument glitters and makes a silhouette against the skyline. This outlook is not just an impressive art on the sky but also it is like the peace and calmness of the temple can be viewed in the sky.

Wat Arun represents Mount Meru, which is said to be the centre of the world as in the Buddhists cosmology. The architecture is build in lieu of the Tibetan mythology of the centre of the universe, and representing Meru which is beyond the physical reach of reality.

The temple has four corners which symbolizes the four directions guarded by gods. The other highlight of the temple is the 67 meter tall -grand pagoda made up of cement. At present the temple is also know by its official name Wat Arun Ratchawararam.

If you are on a tour to Bangkok, Wat Arun is an important site to visit for an enchanting peaceful mind.

Wat Arun, Bangkok address and how to reach

How To Reach: "By Train: 8 KM away from Yommarat Railway Station
By Air: 32.3 KM away from Suvarnabhumi Airport "

Popular tours and activities in bangkok

The Tour Of Thailand
Popular places to visit in Bangkok »


Temple of the reclining Buddha- Wat Pho is among the ancient Buddha temple in Bangkok. The temple is also k...


Some of the famous magnetism around the world does not require much influencing words for tourists or peopl...


A story about Bangkok recited in form of acts having elephants and theater artists, Sian Niramit is a must ...


With an area of 120 acres, Siam Park City is one of the Thailand’s biggest amusement park.  Feat...