Opening Time : 08:00 AM Closing Time : 06:30 PM
Open : Daily Closed on public holidays : No
Entery fee : 100 TBH Authorization : No
Contact No : 0-2226-0335 View address & how to reach
Seasonal Feature : Ladies, do not wear shorts above the knee visited
Rate this Place
? Sorry, You have voted on this article in the past
2 vote(s)
3 out of 5 based on 2 ratings.
Free Travel PlanGet free quote and trip advice
Share via Whatsapp Share on Facebook 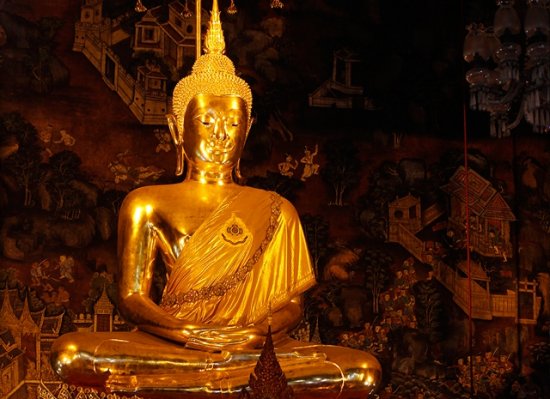 Temple of the reclining Buddha- Wat Pho is among the ancient Buddha temple in Bangkok. The temple is also known as the birthplace of the traditional ‘Thai massage’, due to its being the first university for teaching students about literature, medicine, religion and science.

Build upon the area of 80,000 square meters, Wat Pho is home to over one thousand Buddha images and one largest single Buddha sculpture with 160 ft. length. The whole Wat Pho is broadly divided into two compounds, the Northern walled compound is a place where the medicine school was founded and the reclining Buddha lies. The other compound Southern wall is a monastery where Monks reside and learn.

The main attraction of Wat Pho is the reclining Buddha which is 15m high and 43m long. The right arm of the Buddha is placed under its head with two boxes of pillows. The long foot of the Buddha has 108 auspicious symbols inscribed representing al possible characters of Buddha.

The temple also consists of 108 bronze bowls in which people drop coins as it is believed that it will bring good fortune to them. Wat Pho though is not a pilgrimage place but an important part of the ancient history and a main attraction centre for locals and tourists.

Wat Pho, Bangkok address and how to reach

How To Reach: "By Train: 3.8 KM away from Bangkok Hua Lamphong Railway Station
By Air: 25.2 KM away from Don Mueang International Airport "

Popular tours and activities in bangkok

The Tour Of Thailand
Popular places to visit in Bangkok »


A story about Bangkok recited in form of acts having elephants and theater artists, Sian Niramit is a must ...


Named after the Indian God of Dawn-Aruna, Wat Arun is a temple of Dawn. This temple is one among the 31200 ...


Some of the famous magnetism around the world does not require much influencing words for tourists or peopl...


With an area of 120 acres, Siam Park City is one of the Thailand’s biggest amusement park.  Feat...