Opening Time : AM Closing Time : PM
Closed ON : Tuesday Closed on public holidays : No
Entery fee : Free Authorization : No
Contact No : View address & how to reach
Seasonal Feature : This pass opens for tourist from April end to October end of the year. The permission to travel on this highway is given by Indian army after they clear the snow and inspect the road for it's fitness and safety for movement of person and the vehicles.
Rate this Place
? Sorry, You have voted on this article in the past
15 vote(s)
3.8666666666667 out of 5 based on 15 ratings.
Free Travel PlanGet free quote and trip advice
Share via Whatsapp Share on Facebook 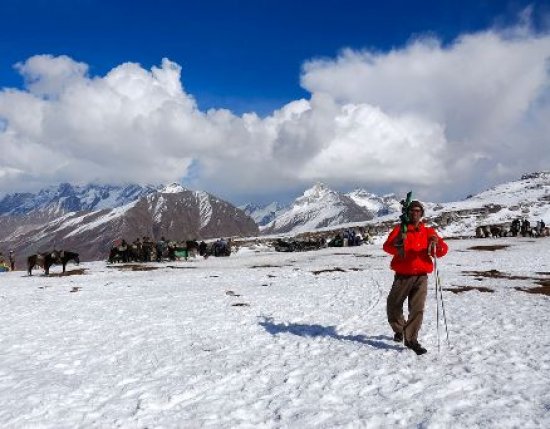 Rohtang is Hindi name for a pile of corpses. Due to bad weather, many people died trying to cross the pass that stands at an altitude of 13,050 ft. The high mountain pass is found on the eastern Pir Panjal Range in the Himalayas, 51km from Manali. It connects Kullu Valley with Spiti and Lahaul of Himachal Pradesh in India.

Rohtang Pass provides a natural Hindu culture in the sough where Kullu Valley is, and a Buddhist Culture in the north where Lahaul and Spiti Valleys are. On the southern part of the pass, there is the Beas River that flows southward from underground. On the northern side is Chandra River that flows from eastern Himalayas and is one of the streams that flows westwards to river Chenab.

Although the pass is mostly known as a dangerous place to cross, it is easily navigable by foot. It gained its ugly reputation when at times unpredictable blizzards and snowstorms struck. Being a trade route that joined people on either side of Pir Pinjal, the pass has been instrumental for trade purposes, bringing together people of varying cultures. It is also an ideal tourist destination, with many people thronging Rohtang, especially during the months between May and November.

Rohtang Pass, Manali address and how to reach

How To Reach: By Train: 215 KM away from Joginder Nagar Railway Station
By Air: 102 KM away from Kullu Manali Airport

Popular places to visit in Manali »