Opening Time : 06:00 AM Closing Time : 06:00 PM
Open : Daily Closed on public holidays : No
Entery fee : Free Authorization : No
Contact No : 01352621669 View address & how to reach
Seasonal Feature : "Park remains open from 15th November to 15th June, It remains closed during rainy season for five months."
Rate this Place
? Sorry, You have voted on this article in the past
2 vote(s)
1 out of 5 based on 2 ratings.
Free Travel PlanGet free quote and trip advice
Share via Whatsapp Share on Facebook 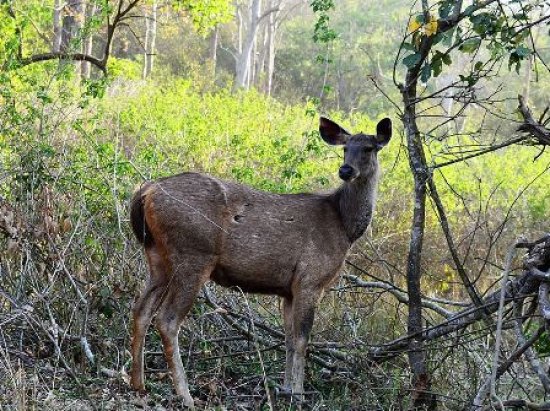 Rajaji National Park is a paradise for nature lovers and wildlife enthusiasts located in Uttarakhand. The park is well-known for its scenic beauty and rich biodiversity that serve as a major attraction. It was back in 1983 when Rajaji National Park was created by merging Rajaji Wildlife Sanctuary with Motichur and Chilla wildlife sanctuaries. The park has been named after a  popular freedom fighter and first governor-general of India, Late Sri C. Rajgopalachari who was affectionately called Rajaji. Sprawling across an area of 820.42 sqr km, the Rajaji National Park is open to visitors only from Mid-November to Mid-June. The park houses avian species which are found in open grassland and in forested foothills.Rajaji is beautifully nestled in the Shivalik ranges and the beginning of the vast Indo–Gangetic plains. The park thus represents vegetation of several distinct zones and forest types including sal forests, riverine forests, board–leaved mixed forests, scrubland and grassy.The diversity of species in this park is a result of its location in a transition zone between temperate western Himalaya and central Himalaya. There are over 400 bird species including Greater Scaup, Black-bellied Tern, Pallas’s Fish Eagle, Tytler’s Leaf Warbler, White-naped Woodpecker, Great Hornbill, Northern Goshawk, Scaly Thrush, Snowy-browed Flycatcher, Rusty-flanked Treecreeper, Black-necked Stork, Yellow-billed Blue Magpie, Pale-footed Bush Warbler, Green Avadavat and Reed Bunting.

Rajaji National Park, Dehradun address and how to reach

How To Reach: By Train: 18 KM away from Rishikesh Railway station
By Air: 35 KM away from Jolly Grant Airport

Popular places to visit in Dehradun »


Khurpatal lake is one of the best scenic locations in Nainital with a peaceful environment....


Naukuchiatal is a small picturesque town situated under the shades of nature. The village i...


Sattal is an interconnected cluster of seven water bodies located in the Nainital district ...


The Eco Cave Garden is one of the most popular attractions in Nainital. The gardens are known for hanging g...


Sariyatal is an artificial lake constructed primarily for tourist attraction and located ne...


Kempty Falls is among the most famous attractions in the hill station of Mussoorie. A British officerJohn M...


Do you love travelling to natural places? If yes, Valley of Flowers National Park is definitely one of the ...


Located at a distance of 19 kilometres from Naukuchiatal and residing at 1375 meters above sea level, Bhimt...


In terms of visiting places, Mussoorie hides many gems among its folds which leave the visitors awestruck a...


Naini Lake in Nainital is one of the major attractions in the area. This beautiful natura...


Kedarnath Temple is one of the holiest temples that Hindus dedicated to their god Shiva. It is located in p...


Malsi Deer Park is situated in the beautiful city of Dehradun and is a heaven for nature lovers. One gets t...


Mukteshwar is a small town situate...


Located in the picturesque cradle ...


Triveni Ghat exhibits a deeper, spiritual connection to its visitors. Boasting as the biggest ghat in Rishi...


The Forest Research Institute (FRI) is a premier institution of Indian Council of Forestry Research and Edu...


Raj Bhawan is the Governor’s House of Uttrakhand situated in Nainital. It serves as a...


Mindrolling Monastery, also known as the Tibetan Buddhist Temple, is located at a distanc...